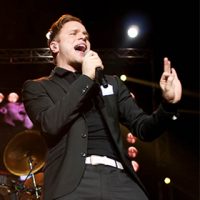 When deafening screams echo around the National Indoor Arena from a largely female audience and a cheeky chappy smiles from the top of a neon stage it can only mean one thing; Olly Murs is back in Birmingham. Following his hugely successful concert at the LG Arena last week, he returned for a second sold out date at the NIA which showed he is definitely no X Factor reject. Opening on his latest single, Army Of Two, Olly looked rather dapper in a smart black suit and shirt as he strutted and danced around his backing band, who were scattered over a brightly lit staircase. Within minutes the audience were won over by his charming but cheeky persona as he moved on to one of his most popular hits, Dance With Me Tonight, which soon had people up and dancing to its distinctive doo-wop flavour.

From this point, he continued to move his performance closer to the sea of fans by performing on a catwalk at the front of the stage, gyrating around a mic stand while performing Personal and Thinking Of Me. As an enormous metal stairway descended from the roof, Olly left his band on the stage to perform a couple of tracks on the walkway. This gave even the fans higher up in the arena that weren’t close to the main stage the opportunity to see their idol up close. He descended from the metal stairs to a mini stage near the back and was joined by his backing singers to perform tracks Hey You Beautiful, I’m OK and Hand On Heart. Thanks to clever trap doors, distractions from the backing singers and a small musical interlude, Olly was allowed to return to the main stage without being spotted and rejoined his band for the next part of the show.

Continuing back on the main stage, he picked up an acoustic guitar to perform a beautifully chilled out version of Busy. After he had finished performing this track he explained to the fans why he had learnt to play a guitar; “I went on holiday a while back and I wondered why none of the girls around were paying any attention to me. I soon realised they were more interested in a man who was busking on the beach with an acoustic guitar… so I thought, I can’t have that!” As the concert drew to a close, he moved onto covers of Jackie Wilson’s Reet Petite and Beyonce’s Crazy In Love, encouraging the ladies in the audience to get up and shake their bums like Beyonce. This was followed up by a full blown covers section when Olly and the band performed energetic covers of Should I Stay or Should I Go by The Clash and Town Called Malice by The Jam.

The concert was wrapped up with several more original tracks, culminating with his first number one single from 2011, Heart Skips A Beat. After roof raising cries for an encore from the audience he returned with the title track from his latest album, Right Place Right Time, and his most recent number one single, Troublemaker. With a mischievous impish grin and a few winks at the ladies watching, ‘troublemaker’ may well be an apt nickname for the still-single but oh so endearing Mr Murs.