Home > Reviews > Album Reviews > At The Drive In – Relationship of Command

At The Drive In – Relationship of Command 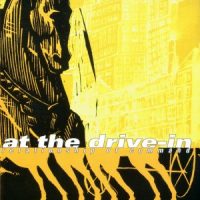 Relationship of Command marked out three very important milestones in At the Drive In’s career: it was the third and final album that propelled them into the mainstream; it included a collection of visceral and technically magnificent songs and an album that combines the raw aggression of hardcore punk with a harmonious and surreal twist. Thirteen years on, it still has the same uniquely captivating qualities that come along so rarely these days, making it a classic and influential album in any collection.

Arcarsenal pounds straight in with groovy maracas with an eerie, psychedelic effect winding its way gradually before crashing into deep bass tones and jerking guitar, mixed effortlessly with coarse vocals piercing through the fray. Every member of the band plays an equal part in every piece, whether it be the guitars and effects fighting for a euphoric ballad or bass and drums for a violent hardcore brawl, the effect is astounding. Pattern Against User, One-Armed Scissor and Sleepwalk Capsules also provide the same kick-to-the-face effect with their no-nonsense, right into the action attitude instead of blending the songs effortlessly into one another and only then providing a calm after the storm has already hit.

Every single song has its own personality and tone. Non-Zero Possibility and Quarantined have a completely different aura. They are spine-tinglingly atmospheric, utterly moving and lulling whilst also creating sinister undertones with reverberating chords, crashing symbols and high pitched tweaks. There is nothing within these tracks that even remotely resembles hardcore punk in any way shape or form. This totally different sound works so well, it creates a break from the raw punk offering diversity, almost a diversion and rest from the noise to recuperate and appreciate At The Drive In as talented musicians – nothing more nothing less – before being thrown back into the passion.

Final song Catacombs combines both of these elements, with an almost painfully spooky intro mixing whooshing effects with chugging guitars to create a cacophony of musical pleasure. This noise quickly transforms into melodic riffs mixed with ballsy shouts to blast the album out in climactic fashion.

To end a career on such a high is but a luxury to some, but such a high comes with great sadness that their talent will not grace the airwaves again. As post-hardcore albums go, this is definitely a stand out and triumphant release that will be repeated by many over the coming years, and passed down from generation to relive the visceral and trippy tunes within this timeless masterpiece.