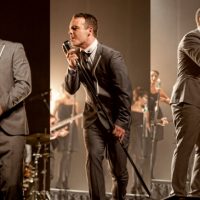 Sam Gray is a singer/songwriter that you maybe haven’t heard of yet, but probably will soon. Having written songs for The Voice and Hollyoaks star Abi Phillips, his musical talents lay very much behind the scenes up until recently. However, having toured with Rick Astley and recently signed to Transmission Records, Sam Gray will be much more on your radar very soon.

The Hull-born singer’s first release, “Cartwheel Queen”, was playlisted on Radio 2 offering a very mainstream folky-pop sound, while this summer’s release “This Girl” gave a nod to Motown with its catchy riff and brass. You’d be forgiven for thinking Sam Gray had been transported from across the pond, as he has a Michael Buble meets John Mayer quality about him. Whether folk or something more up-tempo, Gray has a mature, easy listening feel with a mid-Atlantic sound to his voice.

Currently, Gray is about to embark on a tour with Peter Andre, starting on November 16th, and following on from that, his album is due for release in February 2013. If easy-going guitar-pop is your thing, it’s worth checking out the man billed as a blend of Jack Johnson, Plain White Tees and John Mayer.