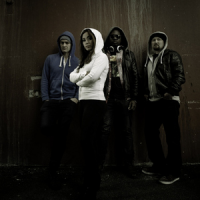 How did you meet and what’s the story behind your name?

We all met on a housing estate in South East London. In the early days the band was called FUSE. When we got to the finals of the national band-search competition Live and Unsigned there was a lot of interest in the band. However, when people googled FUSE weird unassociated stuff came up including a national Australian convention for electricians. The band is not named after an electrical fuse but is rather what happens when east meets west, when heaven mingles with earth ie. the unleashing of an overwhelming ooberfusiasm for life that transfigures the ugliness of ordinary everyday life.

How would you describe your music?

One Republic meets a British version of the Black Eyed Peas, a happier version of Portishead and Bjork! The first album Still Love My Enemies was described by one reviewer as lush dark pop because we don’t shy away from the deeper emotions and feelings when writing our songs. The production included hard beats overlaid with lush synthetic sounds and laced with live strings. Our latest album Seventh Wave develops this production style and includes, on certain tracks, rhythmic cello parts aka One Republic.  You can hear samples of our sound here

What have you been up to so far and what can we expect over the coming months?

2012 has been amazing so far. We have recently completed our second album Seventh Wave which we are busily promoting right now. This culminates with an album launch concert on 28th September at AAA Archangel in Kensington High Street. Everyone’s welcome to party with us! Free Admission! We have headlined concerts in Trafalgar Square, Leicester Square, Westminster Square.  We are also leading a global campaign to free an innocent woman sentenced to death by hanging in Pakistan.

We did a number of concerts in Italy in May and now we have gigs lined up all over the UK.  We have been invited to Canada for a series of huge concerts culminating with a performance in front of Canadian dignitaries.

If you could duet with anybody who would it be and why?

LZ7 and Matt Redman because when we were recently asked to headline a human trafficking concert in Grimsby we did our own verison of their human trafficking song, 27 Million. It would be amazing to sing this alongside the original artists! Hear our version of 27 million here

What’s your desert island disc and why would you take this one album?

Coldplay’s Viva La Vida because the songs have a deep message and they, like One Republic, blend orchestral sounds into classic pop anthems.