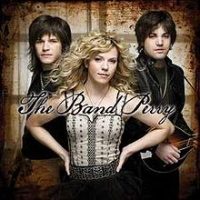 The Band Perry is a family country folk trio consisting of siblings Kimberly, Neil and Reid. Hailing from Mississippi, they have already made a lot of noise on the American country and pop scene and look set to do the same in the UK. If you hold any credence to critical acclaim then the fact that they were nominated in the Best New Artist category at this year’s Grammy’s should be indicative to what this band are capable of.

If you were to mosey on down to your local saloon you could quite possibly catch dancing couples grape-vining to debut single Hip To My Heart it is so perfectly genre specific. That’s not to say they’re not accessible as the band seem to follow likes of Taylor Swift and The Dixie Chicks, a strong indicator that country music has more than made it’s crossover to the mainstream. The lyrics in the songs have a wholesome storytelling quality befitting in this oeuvre. Oftentimes the references are youthful and seemingly naïve. Gumball machines and ice cream in Quittin’ You and Independence as allegories for sour relationships are just a few of the buoyant and tender lyrical twists on the album. The songs are great for a younger audience but older listeners may find it difficult to relate to their rose-tinting.

However, it is the slower numbers that really grab your attention. Lasso and If I Die Young show the true potential of The Band Perry should they achieve a long lasting career. If their current award status is anything to go by (they won two Country Music Association Awards (CMAA) in 2011 in the categories of Single of the Year and Song of the Year) – and if indeed the awarding bodies opinions are of worth, then the development in their sound is something to anticipate.

Their debut is 100% country, there is no denying this, however when a band can create a country sound that can cross over the pop border then you know you are on to a winner. One thing is for sure, the next generation of country and folk has a very intriguing and youthful promise to it.