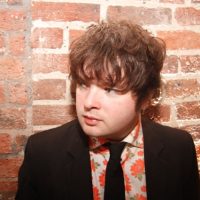 Thomas White, the man armed with practically nothing but an acoustic guitar, an old Sony Handicam and his voice, fills in MTTM on his new album. Yalla! was written and recorded during his six-week stay in Egyptian town Dahab.

MTTM: Your new album, Yalla! is set for release this month. How do you feel about the forthcoming release?

Thomas: It’s always a relief when good press starts coming in for a record. I guess I’ve been blessed in the sense that critics have never felt the need to particularly maul my work, which I presume has saved me a lot of sleepless nights. In terms of the album, I think it’s my best solo work to date – most direct writing and production – which was a feat in itself, considering how much overdubbing and remixing went on with the last two…

MTTM: You’ve toured and recorded with a number of other artists. How has the experience and exposure influenced or developed your individual sound?

Thomas: I learnt to drum playing in me and my brother’s band, The Electric Soft Parade. Then I pretty much learned how to play guitar from playing in Brakes. Playing with Patrick Wolf gave me the balls to go out there and not give a fuck what anyone thinks. Sparks have always been total icons in our household so that was just surreal, but I learnt so, so much in those two days playing with them. Unbelievable.

MTTM: Do you prefer performing solo or collaborating with others? Or are they simply different experiences?

Thomas: I like to do a little bit of everything all of the time. Collaborations keep you fresh, and you’d never learn anything new just sat in a room on your own, but self discovery is also a vital aspect. You have to have both, and can’t really have one without the other.

MTTM: A lot of your music is acoustic and vocally-driven. What is it about this style that attracts you to it?

Thomas: Personally, I don’t like too much going on in music. In the past I’ve been a real big fan of The Flaming Lips, Sparklehorse – people who really throw everything at the wall, production-wise. But I’ve come to realise there’s something impenetrably cool about stuff like Bert Jansch, Elliott Smith, Nick Drake – something no studio trickery can conjure.

MTTM: You recorded Yalla! while homesick in Egypt. Did you ever imagine or plan the release of the album, or was song-writing an escape?

Thomas: Neither really – I just sat down when I arrived and kinda had this internal realisation – six weeks is a long time, you know?! Then the first couple of weeks I got into this really nice routine, and before I knew it, these songs were pouring out. I think the only really conscious decision was not to  get into any overdubbing of additional instruments and just keep it completely acoustic, which is a first for me.

MTTM: ‘Yalla’ means ‘let’s get going’ in Arabic; what’s the message behind this? Why did you choose it for the title of your album?

Thomas: It’s the name of a bar out in Dahab, and just seemed like a really cute little message to put out there into the world right now.

MTTM: Although only a few English shows are currently set-in-stone, can we expect to see more of you around the UK and Europe?

Thomas: Myself and my brother start work on a new ESP record this week, but diaries permitting I shall be venturing out with my mini-choir and performing the album in full at select dates throughout the summer, yes. Europe? Yes please!!!